On July 18, WSDOT Secretary Roger Millar gave the keynote speech at the American Association of State Highway and Transportation Officials (AASHTO) 2018 Joint Policy Committee meeting in Spokane, Washington. In front of Department of Transportation leaders from across the country he stated:

“…congestion is a problem we simply cannot solve.” … “We like to talk about traffic congestion as an issue, but it is actually a symptom of a larger problem – and the problem is we don’t provide affordable housing and transportation solutions,” 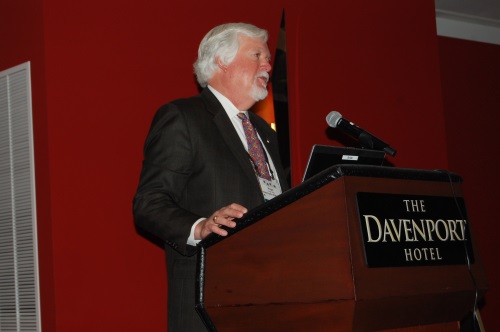 In response to Millar’s speech, state Senator Phil Fortunato wrote a letter to Secretary Millar calling him out for failing to act according to the charter of WSDOT.  Read the letter to understand the mission statement of WSDOT.  The letter calls out some serious issues with Millar’s opinion. I only wish it had been published as a team effort and sent by consensus from the Transportation Committee. But that doesn’t happen often between legislative sessions and particularly not during campaign season. It is frustrating that the divisiveness of party politics impedes collaboration among legislators to address issues like this as a team, especially when this is not a matter of party ideology.
Here is his letter: 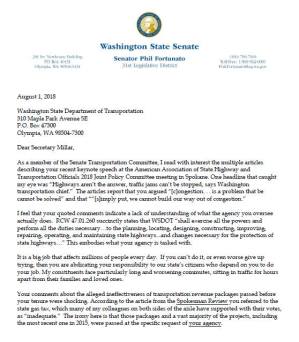 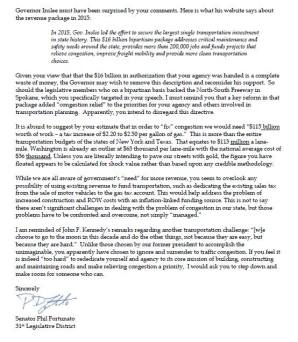 I agree with Sec Millar that congestion is a symptom, but it is not a symptom of overpriced homes. It is absurd of Sec. Millar to use the affordable housing issue as a scapegoat for WSDOT’s failure to address our transportation issues. In fact, it is because of congestion that we have a problem with affordable housing. (Not exclusively, but as a major contributor.)  Homes in the urban centers and near transit facilities are overpriced because congestion makes living further away from work so much less desirable.

This is the same convoluted logic that WSDOT uses to claim charging money for some lanes of traffic will make traffic go faster. I-405 isn’t congested because home prices in Kirkland and Bellevue are so high. Home prices in those cities are so high because if you live there you don’t have to deal with congestion or toll lanes as much; while home values further away are cheaper because people who commute from there must deal with the congestion more. Of course, their cost of living has still increased, not because of home prices, but because they must also pay tolls to get to work on time. Which further illustrates just how absurd Sec. Millar’s statement is. Millar talks about not providing “affordable transportation solutions” yet WSDOT implemented toll lanes that selectively harm the very people who already can’t afford to live in downtown Bellevue/Kirkland and they are about to do this to all HOV lanes across the region!

Some would advocate we should all live as close to work as we can. That is not always possible or desirable. I chose where I live because it is close to my family and the activities I enjoy. Even if I could live anywhere in downtown Seattle, I wouldn’t want to. Furthermore, I have lived in the same location for decades while I have worked at companies from Seattle to Issaquah to Bothell. It would be absurd to relocate every time I got a new job or worked with a different client, not to mention if I were married or had kids at home. We wouldn’t all be going to the same places.
No, Secretary Millar, don’t play the affordable housing card to cover for your inability to address congestion. What is most disturbing is that now all those DOT leaders are going back to their states to propagate this falsehood that a lack of affordable housing causes congestion just as they have propagated the ill-founded logic of toll lanes make c.

This is absolutely a problem that can be solved, though perhaps not with the current people we have working on the problem. Perhaps congestion is a symptom of the hiring practices at WSDOT?  I contend that if we could recruit a pool of talent from Amazon, Microsoft, Google, Inrix, and Apple, we could find a way to solve this transportation issue and even reproduce it for other cities across the country. Collectively these companies have the talent that understands everything from transportation logistics to optimizing networks. If Steve Jobs were here and running WSDOT, he would say “Go back and do it again until you figure it out. And if you can’t, I’ll fire you and hire someone who can.”