Find out what WSDOT is trying to do to fix all the problems created by the Express Toll Lanes while waiting for the Legislature to go back in session and eliminate them entirely.  WSDOT is holding an open house Aug 18th from 5PM to 7PM at the Bothell City Hall.  Details at the City of Bothell website.

Questions you should be asking include:
1. In the 9 month report, slide 21, WSDOT reports peak period bus ridership is up only 3%.  This actually indicates a decline compared to overall growth in the region. Where is the benefit? 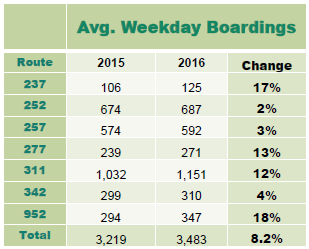 But an estimated 20,000+ carpoolers PER DAY in 2-person carpools were displaced from the ETL and the capacity in the ETL was reduced by 850 people PER HOUR. 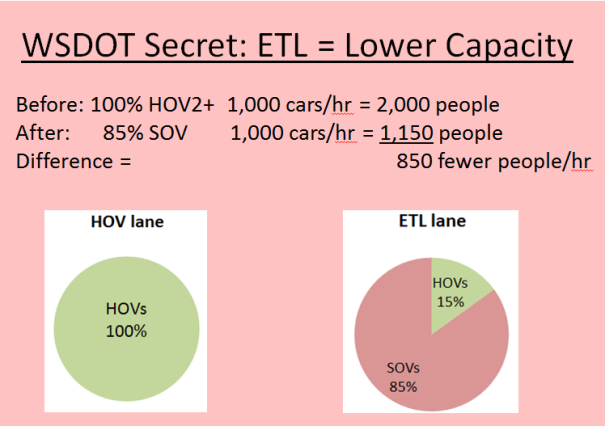 How is this in any way an improvement?

3. On slide 5 of the WSDOT annual tolling report, WSDOT claimed their customer service centers handled 6.5 million communications with customers. This translates into millions of man-hours of time wasted by customers.  How is this an improvement over no tolls?

4. WSDOT has not made any reports of collisions since the first 3month report indicated collisions were up more than 55% since the tolls began.  Given the primary role of WSDOT is to provide safe transportation, why isn’t WSDOT tracking and reporting this data?  This seems like a gross oversight.

5. The tolling algorithms continue to be crazy with inconsistent pricing as revealed in an article by stop405tolls.org.  The pricing creates even more uncertainty of commutes as people don’t know if they will be able to afford the toll or not.  This does not create a “more reliable commute”.

6.  WSDOT has 6 youtube videos, many pages on a website, an interactive map, and a mobile app to try to help people decipher the ETL.  This is way too complex for residents and impossible for visitors.  This is in no way an improvement over simple 2+ person carpool lanes.

7. The carpool lane never exceeded 1300 vehicles per hour. It takes 1500 -1800 to cause the type of congestion it had.  Clearly the congestion in that lane was not from overuse, but from other causes; namely friction between lanes, cars entering/exiting the lane, and buses which drive slow. (see video) Why aren’t you addressing these issues instead of hiding behind the lie that there were simply too many carpools?

I’m sure you can think of some questions of your own.  Be sure to attend and call them out on it.  But don’t expect to get any satisfaction.  The only way to fix this is to use our ratings to vote for legislators who have the vision to recognize the farce of the ETL and the courage to stand for constituents over parties.  Then once in office, encourage them to sponsor and vote for a bill to stop this reckless design by WSDOT.

8 comments on “7 Questions for WSDOT”