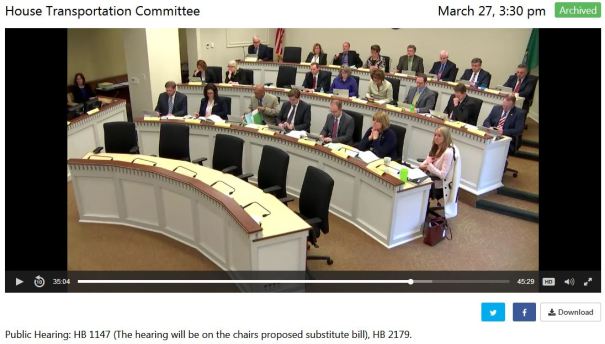 CORRECTION TO THE PREVIOUS POST: At the end of the presentation of this bill for a hearing, Committee Chair Judy Clibborn explained that the purpose of this bill is NOT HB 2071 which was to make the toll lanes on SR167 permanent (and available for bonding). That bill appears to have been abandoned and replaced with HB 2179 which simply extends the pilot program of SR167 to match the pilot schedule of the #405ETL. In this way they will be handled collectively along with I-405 as a complete system. Without this bill, the toll lanes on SR167 would be canceled at the end of the current pilot period June 30th.

The tolls on SR167 have proven to be even more expensive to operate than the tolls on I-405. The revenue collected was $4.5 million while it cost $4.2 million to operate them for a total of only $300,000 dollars in “profit”. That is an insane 93.3% operating costs! Only 6.7% of the money collected from the tolls is available for improvements to the highway. Yet that $300,000 cost tax payers $4.5 million out of their pockets. Meanwhile it has done absolutely nothing to improve congestion on that road.

So my sincere apologies to Representative Clibborn for the confusion on which bill this is being considered and thanks for the clarification. At the same time, the closer examination of the financial viability and other problems with SR167 demonstrate it is an even greater failure than the toll lanes on I-405 and need to be discontinued immediately, regardless of what happens with the rest of the system. The video of the bill review can be watched here.

One comment on “CORRECTION: HB 2179 continues pilot on SR167 beyond June cutoff.”