Home › Uncategorized › Carpools way down on I-405 Express Toll Lanes

Carpools way down on I-405 Express Toll Lanes

Keep in mind that this compares to 100% carpools prior to the ETL.  The Passengers Per Vehicle (PPV) ratio when it was an HOV lane was about 2.2 PPV.  Now that it is a HOT lane, it operates at about 1.2 PPV.  Meanwhile, there has been NO INCREASE IN VOLUME.  (See slide 8 of their presentation). So they are actually moving fewer people than before.
(Note the drop in flow during a WSP stop at 7:18 AM on the inside shoulder as captured in the photo below.) 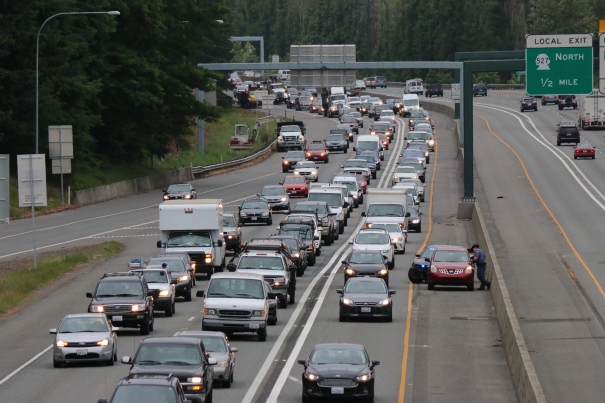 Carpool usage in the 405ETL is way below what they expected, even after giving away 10,000 FlexPasses*. Why are people at WSDOT the only ones surprised by this?  In the Everett Herald article “Fewer registered carpools in I-405 toll lanes than expected” it refers to WSDOT’s quarterly financial report to the WSTC where most people now using the #405ETL choose to pay the toll than try to get a 3 person carpool.  This is no surprise. I predicted  this and documented reasons why 3 person carpools fail . The 2 person carpools were forced out of the HOV lane and replaced with those SOVs who can – and will – pay.  I reported on the  Texas A&M University research that proved carpools would decline with HOT lanes.  Their research even included SR167.  WSDOT’s report then comes as no surprise: The number of SOVs per day on SR 167 have steadily risen by 300 trips per day every year and are now at 4,800 per day  What WSDOT omits from their report is the decline in carpools. 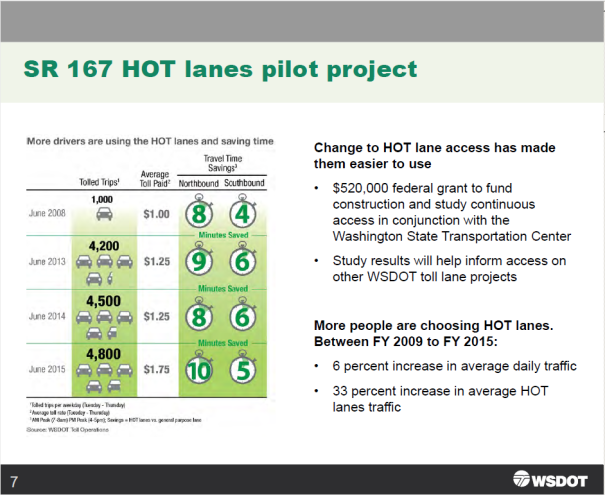 Click here to watch the video of the full report presented by WSDOT to WSTC. Jump to timestamp 1:28:25 to see the financial report.  But you may want to watch the full report about the I-405 tolls which starts at stamp 35:25.  The full agenda and links to the slides being presented can be found here, agenda items 7 and 8.

Please sign the petition here and share it with everyone you can. Our goal is to reach 40,000 by August.

Up next: Is WSDOT misrepresenting the data?!

* – Taken from Slide 10 of the presentation