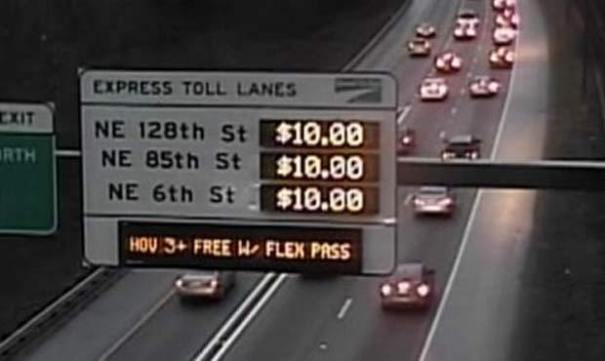 I sent the following letter to the Washington State Transportation Commission to prepare them for WSDOT’s presentation tomorrow.  WSDOT previously gave this presentation in October to a gathering of Eastside city council members.  The driving factors in the presentation appear to be: “Protect your career” and “Follow the money”.

Members of the WSTC:

On Tuesday, Dec 12 you will be given a nearly 2 hour presentation on the performance of the I-405 Express Toll Lanes. I expect they will be giving a presentation similar to the one they gave at the I-405 Executive Advisory Group meeting in Bothell on October 17th. In that presentation WSDOT provided numerous misleading pieces of information and egregious conclusions. Your public comments period only allows me 3 minutes to refute their 2 hour presentation. I cannot do it justice in that time, so I will give you some explanation of the misleading facts that will likely be presented so that perhaps you could challenge their thinking.

1. A random video clip of I-5 vs I-405 used to claim tolls make I-405 work better.
WSDOT showed a video clip of I-5 going slow and then a clip of I-405 flowing faster, leading the lay person to the believe I-405 is better and tolls are the reason. While seemingly logical to the layman, this comparison to I-5 is completely invalid for many reasons that a more skeptical observer would catch, including:
1. Random video can be pulled from either freeway demonstrating any condition they wish to convey. This has absolutely nothing to do with scientific observation. This is simply to invoke FUD (fear, uncertainty, doubt) in their audience.
2. The countless variables that determine traffic speeds on I-5 and I-405 are not equal. Even the numbers of vehicles using them are different,
3. The HOT lanes on I-405 have a 2′-3′ separation with restricted access points whereas the HOV lane on I-5 has no separation and unrestricted ingress/egress with only a single white line. As a result, there is friction with the GPL, naturally inducing the HOV lane to move slower. In addition, the buses are mandated by regulations to stay within 15mph of the lanes beside them when there is no lane separation. In other words, the buses force the lanes to match the speed of the GPL beside it. To further exacerbate this, there are many times more buses on I-5 than I-405. The HOV lane is not build it to FHWA standards that require a 4′ separation from the GP lanes. If they were built to Federal code, the single HOV lane would flow much more freely.
4. I-405 has added direct access ramps and limited entry/exit points. This reduces the impact of the buses degrading the HOT lanes as they merge into/out of them. I-5 has a few, but not enough.
5. On southbound I-405, the 3 lane section is heavily congested which throttles the flow into the 5 lane section making it flow better.
6. In no case does charging money to use the lane influence the speed of the vehicles.
Again, the lay person wouldn’t know any of these factors, but WSDOT engineers should.

[This is the precursor for the legislature expanding tolling to I-5.
Misrepresenting such data is an insult to the transportation engineering community]

2. WSDOT claims I-405 is flowing faster now than before the tolls and concludes it must be because of the tolls.
In reality, the lanes are flowing faster due to several factors, none of which are from charging money to use them:
1. A 25% increase in capacity south of 160th St and 33% increase in capacity where they added hard shoulder running.
2. Greater separation from the GPL with the double-white lines (though still not the 4′ defined by FHWA).
3. Improved efficiency due to the restricted ingress/egress.
4. Direct access ramps were added.
5. Construction ended. For the 2 years leading up to the tolling, traffic was constantly disrupted due to construction with erratic striping, uneven pavement and construction activity.
6. Diversion traffic. As described by Mark Hallenbeck from UW Transportation department and confirmed by Inrix data, mobile apps are guiding drivers to use side streets, avoiding arterials where WSDOT monitors.
7. They have expanded the time defined as “peak hour” to make performance appear more favorable and to meet the FHWA performance requirements.
Again, any speed improvements achieved have nothing to do with drivers paying money to use the lanes. In fact, where tolling was implemented with no capacity change (the section north of 160th St), traffic got worse. When tolls were lifted at nights and weekends, traffic improved universally.

3. “Even 20 lanes won’t fix the problem.”
In their report WSDOT shows a 20 lane highway built in Texas and claims that even with 20 lanes it still fails and then led the audience to the conclusion that this proves building any more capacity is futile.
What WSDOT didn’t say in their presentation was that those lanes include frontage roads and EXPRESS TOLL LANES. If anything, this proves that ETLs are NOT the answer.
In fact, again they are making a completely invalid comparison.
First, Houston is the 4th most populous city in the country, many times the size of the Eastside even with projected growth.
Second, I-405 is the equivalent of a rural capacity freeway in the heart of a major metropolitan center with only 3 lanes each direction for about 20 of it’s roughly 30 mile length. This is the same capacity as when it was originally built in the 1960’s.
No one has ever suggested expanding I-405 to a 20 lane highway or anything even close. Just build the capacity as was identified 15 years ago in the Master Plan to upgrade this rural freeway to an urban freeway. This comparison to a 20 lane freeway is another tactic used by the presenter intended to evoke an emotional response by the audience. And it worked with the city council members at the EAG meeting because they don’t have the expertise to question WSDOT critically.

4. “WSDOT conducted a survey and the people responded that they like the tolls.”
This survey is riddled with sampling bias to try to prop up WSDOT’s case. They only asked people who have a GoodToGo Pass and left out the overwhelming majority of drivers who fill the GPL and never use the toll lanes. In their presentation, WSDOT states they also asked people who do not use the tolls. But those people still have a pass. What’s more, WSDOT claims that 60% of survey respondents approve of the ETL. This sounds good, but in reality that means that even 40% of the small portion of people who have a pass don’t approve of the toll lanes, not to mention all the drivers filling the GPL who hate them. This could be further manipulated by surveying people in Bellevue, Redmond, and Kirkland and avoiding people who live in Snohomish county.
For comparison, consider that a group of 5 activists collected 32,000 signatures in less than 3 months with minimal publicity and mistakenly used a petition website that many more people refused to sign on due to its political orientation. In spite of this, it was THE MOST SUCCESSFUL petition ever hosted on moveon.org for a local or even state-wide issue!

5. What they aren’t talking about:
They are not reporting the negative impact to trucking and freight which cannot use the ETL. Exports and trucking are a major portion of Washington’s economy.
– They ignored the increase in diversion traffic.
– They ignored the increase in collisions and quit reporting on them after the first quarterly report was presented because accidents had increased by over 50%.
– They ignored the fact that carpooling has been decimated, increasing the solo drivers on the road.
– They ignored the fact that Snohomish County residents are paying nearly all of the toll revenue with $10 tolls while suffering with 3 lanes while Kirkland enjoys the $0.75 tolls and 5 lanes.
– They aren’t reporting the vast number of billing errors that customers are receiving. Even motorcyclists are getting billed repeatedly and have to fight to get the charges reversed.
– The toll lanes were paid for with GAS TAX money NOT TOLL REVENUE.
– Federal law as well as state law mandates that they be discontinued if performance requirements aren’t met for 180 days. Yet The toll lanes continue to operate even though they have been failing to meet the speed requirements since opened over 2 years ago.

Please use these points to ask WSDOT the hard questions. It is truly a travesty and a disservice to us all when equal time is not given to examine all perspectives and possibilities.
When everyone thinks alike, then nobody thinks. And group think is contagious so that soon everyone can be convinced to accept even what is absurd, like charging money to use a lane will make them all go faster.

Please help fund our cause to promote and raise awareness to this travesty.
Consider clicking the “Donate a toll payment” button at http://stop405tolls.org
And now is the time to call your state legislators again to demand removal of the tolls.  Click the “Find your legislators” link at the top of the page or visit http://app.leg.wa.gov/DistrictFinder/